A great Live Oak, king of Califia’s trees, spreads his jagged lightning shocks of evergreen, like a Summer storm, over dry expanses of yellow grass. The increasing heat makes oaken shade a God in very truth, for those who undertake high Summer’s Initiations of Blazing Savannas. In Autumn, acorn meal will typify the Summer wealth of myriad seeds riding equinoctial winds. These winds will carry life far and wide through Sun realms, and back to Earth.

On the eve of the longest day of the sacred year, the now fully bloomed Goddess and God, Titania and Oberon, are led by Nymphs and Panisci, Nature hushed and desire-primed, to the White Wedding Stone before the gigantic Live Oak. The Oak and Altar of the Four Rivers stand within a Henge setting of Twelve Great Menhirs, or Monoliths. Their field of gold is edged with the twenty-two vowel and consonant Trees of the Sacred Nature Charm Calendar. The trees and stones are subtly shaped, angled and aligned to every climactic wilderness community and annual celestial event of the surrounding region. They are carved with hieroglyphs of magically corresponding plants, stars and land-form postures. On their edges, the seasonal-arboreal Ogham rock writing is incised. When the Fays whirl through the Henge, the holy pictures and tree strokes speak sparkling colors of wilderness moods and hieratic horizons. Now, to begin the grand defloration and love climax of the year, the stones and trees are now extravagantly decorated. 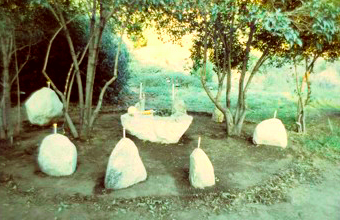 In free, mazy spirals, the thickets of Faerie thorn lead up from two converging stream beds, that together form a Y of Aphrodite. From this rounded combe, the sacred Oak Woodland, in which humane natural beings perennially remarry Califia Land, spreads out to the distant Sierra threshold of the North Star. On the Venus Mound of Midsummer Marriage, is the kindling quick of Faerieland, the acme of exchange for the entire surrounding Land-Sky-Love Lock. In the boughs of the trees that dot off into the distance, the Fays have arranged charms of various Oghams, or Regional Nature Codes, which fuse Archetypes and Eco-Systems. The woodland fringes become intricate dancing semaphors of bird, tree, river, weather and flower Oghams. Each year the codes are altered and augmented, for surprise is the very fountainhead of wildness, as continuation is the river-bed of love life.

The far prominences about Hod Hill, where unite Aphrodite of Deciduous Forests and Ares of Open Grasslands, are all aligned, through the White Wedding Stone, with sacred land and star tracks branching out into the whole world. Many of the prominences are crested with high holy groves. On the edges of these, as far as the eye can see from the Marriage Meadow, twin bon-fires light up. One after another the fires leap over a succession of hills and headlands leading closer to the wedding place.

All are assembled now. As the closest fires flare to ring in the meadow with light, the Great Lady emerges from the Old Oak. Her black hair flies on the still air: Its constellated coils spread the edgeless curtains of Her dark swimming Flesh in all directions. The changing volumes of this stupifying figure, all at once skin, veils, tresses and ageless song, glimmer with stars and fireflies. All stand back from HER!!! Toward Holy Maid and Man, to Kore and Kouros, slowly weaving Her steps in the Topocosmic Dance, and issuing strange clicks from the abysms of her throat, she advances with a tall Stang-Phytala, and places it between the trembling Goddess and God. She raises her arms in blessing. A black candle of Sumac wax burns between the Phytala’s Horns of Ash. Its’ wreath of Solstitial wild flowers spells out, in flower Ogham, the cosmic elan of her holy vowel name, which animates the flesh of the holy consonants. A white quartz crescent Moon glows beneath the wreath.

Through the channels at the four corners of the Wedding Stone, ministrant Fays pour out the juices of the Four Rivers of Paradise. After the litanies of the Season are intoned, the Charms of completed pollination and green leaves are gratefully revealed. The new Queen and King of the Wilds exchange Rings and join their right hands - those mighty Servants of Nature - through the floral wreath. With their left hands, they grasp the two Horns of the foundational Moon-Ark beneath.

As the Black Goddess of Holy Spirit expands with her blessings into the surrounding night, petals of Mexican Elderberry, Laurel Sumac, Jacaranda and Privit rain down from the Shadowy boughs of Oak, over the wedded Pair. The miracle infant of the green fruit is suddenly uncovered from a heap of petals on the White Alter in a blaze of torchlight. 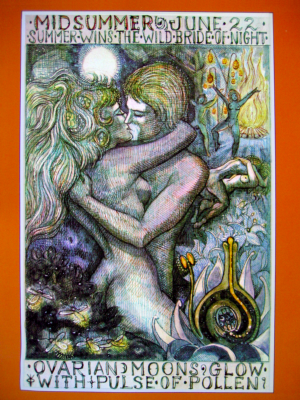 Then the startling shrill cry of mating challenge breaks from the quaking bosom of the new Queen. Her splendid robes fall away, and she darts off into the Southern fringes of a dense Oak thicket. After a choked moment, the King dashes after her. His flight gives the signal for many bonfires to be dumped down cliff-sides that have been especially fire-proofed for the occasion.

From ribald ranks of celebrants a tremendous shout goes up. Big rings and columns of straw appear above their heads at opposite ends of the field. The women gather about the rings, which are tissued over: the men rally about the long straw columns. Through the smokey, Oaken firelight, the men push the columns into swelling waves of women, who, squealing with delight, try to remove the rings from the on-plunging phalli of grass. When the last Ithyphallos of plaited Califia-Grass is pushed through a Hymeneal Ring, huge gongs and hollow tree-trunk drums resound throughout the hills. The Goddess and the God reveal themselves on a distant ridge in the South. Nakedly they hold aloft Kteis and Phallos of grass fitted together. Then, midst tumult of fire falls, exploding fire works, enormous bombs of flower petals and small green fruits shot from great stang catapults, the two depart on their Summer honeymoon. Evoe!!!

The Midsummer Marriage perennially re-unites the God of human community to the Goddess of all-containing wilderness, the only true commonwealth.

The May Pole and Ring of the preceding Season are removed from their separate mounds in the Black and White Thorn enclosure, and fitted together in the Oak parkland. The Fays dance about it, interweaving ribbons and kisses.

Many marriages are completed this night. And each wedded couple is wedded to other couples according to the mystic bonding of the Paradisal Quaternio. Then again, each Mandalic Family of Syzigies is linked to several other, and a sacred eco-totemic name is assumed by the Clan, whose coherence is visionary. The ramifications of magical and ceremonial crossings of animae and animi finally includes the whole regional human population, which is wed, in turn, to the Land-Sky-Love-Body. Each wedding is also wed to a natural feature of the land. Thus humanity is joined in the family of Nature.

On Midsummer night many Fays assume new magical names in dedication, under the Muse, to new tasks of wilderness care, or, very sparingly, to the paradisal maturation of a few amenable eco-systems. “The principles of evolution must also evolve.”

A happy lunacy of Puck-led wildermaze play proceeds through the last pale-starred watches of the night. At dawning of the longest day, all view the Sun rise behind the North Solstitial Peak. Silently, they meditate on his spiritual eminence. Then they thank the Moon, his Mother, Bride and Daughter, for bringing him in through the ages, and for lensing and regulating his energies with exquisite, painstaking gentleness, in care of all Earth’s children.

Through smoked glass, the adoring Fays watch the Sun break clear of his alpine cone, and put on his Summer sovereign robes of sapphire, fruit-censed skies, all brightly brocaded with bees.

The Sun lights up his great Oak behind the White Wedding Stone of the Moon. His rays stampede down wrinkled arroyos to the Ocean.