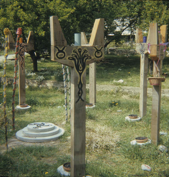 Building Your Own Faery-Ring Henge

In the film, Dancing With Gaia, Fred briefly describes laying out a sacred circle, or henge. Here's how to do it:

Choose a convenient place (such as your backyard) that will allow you to connect to and watch the heavenly bodies and the earth around you, as they change throughout the year. Find a space big enough for a large circle to be laid out on the ground. It should be in an area where you can go regularly, and ideally would be fairly open to the sky and horizon.

In the film, Fred says simply: "start out with a compass rose". This means using the directions indicated by a compass to give you North, East, South, and West. Using a magnetic compass can give you the direction of north, but it will differ by a number of degrees from true north, depending on where you are on the earth. To use one, place a standard compass at the center of your circle-to-be. Set this compass on the ground in the center, and push a straight wooden stake or staff into the ground right next to it. Magnetic north will be shown by the compass's red needle, or arrow. Put another stake in the ground out at the edge of the circle, directly where this arrow points, to the north of the center stake. This point will be Magnetic north. If you know the declination from magnetic north for your area, add or subtract the correct number of degrees to find true north. 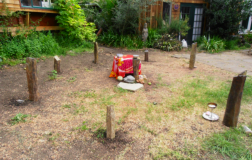 If you don't have a compass, or want to accurately find out where true north is relative to magnetic north by eye, find True North naturally: wait until night, and sight from the center staff to the North Star (the North Star is at the end of the little dipper's handle, and pointed to by the two end stars on the big dipper's ladle). Stand so that you are looking over the center staff, with the North Star directly over the end of it. Have a partner plant another stake directly below the star, out at the edge of the space where you are laying out the circle.

Now go to the Southern edge of the circle, and look to the north. Moving from side to side, find the place where the center staff and the North Star's stake line up, visually. Put a stake in the ground there, too, marking the South.

Next mark the east and west. Use a large square piece of paper or card with a hole in the center; making sure it is an even square first. Fold it in half one way and again the other way. Open it out, and then fold it on the diagonal twice and open it out again. Now, placing the hole over the center staff, pull the card down to the ground. Move the card until one corner points to the north staff. The opposite corner points to the South point on the edge of the circle. The two remaining corners of the card will then indicate the East-West axis. Go to the East edge of the circle, and move from side to side until you are at the point that lines up with the East-West point on the card, and put a stake in the ground. Then, cross the circle to the west, and put a stake in at that spot on the circle, so that the East, Center, and West stakes are all in a line. Refer to the remaining fold-lines (when you folded the card in half) to use as pointers to the cross-quarters, South-east, South-west, North-west and North-east. Now you have a stake in the center, and at the eight sacred directions. You may remove the card now. In time you might replace the stakes with large stones.

On a Winter or Summer Solstice, go to the circle at sunrise or sunset, to mark those positions of the sun, by putting more stakes out beyond the edge of the circle. As you stand in the center of the circle, looking past the center staff right in front of you, looking towards the sun as it crosses the horizon. Wear sunglasses! Put a stake in the ground at the edge of the circle to mark this point, lined up with the sun on that day. This rising or setting point will change through the year. It will be the farthest north or south on the solstices. At equinox, it will be in between.

Note where the moon, planets, and other bodies rise and set also, and mark them, too, if you can.

There are many ways you can use your new Faery Ring Henge to celebrate the high-tide moments of the Seasons, and important moments in your life (births, deaths, anniversaries, and so on). You can place a special stone on the edge of the circle to show where you are in the year, recalling that it starts with Spring Equinox, March 22nd, in the East of the Henge, and progresses to Summer Solstice at June 21st in the South, then to Fall Equinox on September 22nd in the West, and to Winter Solstice on December 21st in the North. It is good to start by blessing your Henge.

The center of your henge is now your sacred omphalos or navel of the earth. From it you can set up a series of links from your Henge which will go out in all the eight directions to other sacred sites as far as the horizon and beyond. You can do this by traveling to wild places in each of the eight directions and leaving a small stone, and, with permission of and thanks to the faery spirits there, bringing back a small stone, or something else natural and where removing it will do no harm. Bless these mementos, decorate them with, at least, the name of the place they came from, and put each one at the base of the marker for the direction it came from. There are also ways to link to the stars and bring them down into your circle, using a "Star Altar" or a large bowl of water on a dark night. Over time this way you can feel your circle to be at the center of a vast web of energy reaching out over the earth and cosmos.

For more details, read up on Henges in Celebrate Wildness: Magic, Mirth and Love on the Feraferia Path, our new book on Feraferia.