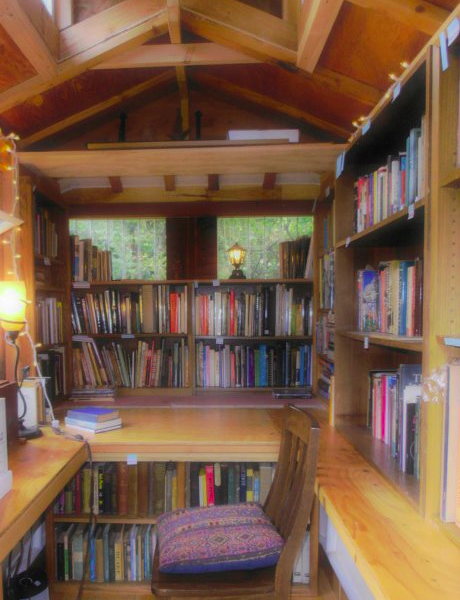 These are some of the books in the Feraferia Library (above). They are books which were especially influential in shaping Fred Adams' vision of Feraferia, plus a few more. The short book descriptions are by Jo Carson.

The Candle of Vision - The Autobiography of a Mystic, by "A.E.", 1918. George W. Russell's insights and visions, inspired during meditations in the hills of Ireland, have the ring of truth. Moving.

The Recovery of Culture by Henry Bailey Stevens, 1953. Origins of the universal "myths" of Paradise, how we lost and may recover it. Central.

Eleusis - Archetypal Image of Mother and Daughter, by Carl Kerenyi, 1967. The most insightful and accurate book on the 2,000 year long Mysteries of Eleusis, a pattern and source of profound inspiration for Feraferia.

The Secret Science Behind Miracles, by Max Freedom Long, 1954. Huna insights into what we are and how it is possible to change reality.

The Gate of Horn, by G. R. Levy, 1948. "A study of the religious conceptions of the Stone Age, and their influence upon European Thought". A spiritual history of western humanity.

The White Goddess - a Historical Grammar of Poetic Myth, by Robert Graves, 1948. The ancient White Goddess of Birth, Love and Death, seen as phases of the Moon, was beautiful, generous, fickle, wise, and implacable. True poetry has a single language and a single infinitely variable theme which expresses through mythic language the life of the White Goddess. Though seen by some modern Celtic scholars as flawed, it remains a dense, grand and pivotal work. Here is Fred Adams' review (link):.

The Secret Commonwealth of Elves, Fauns and Fairies, by Rev. Robert Kirk, 1691 & 1815. Rev. Kirk's homey descriptions of the Fay and his encounters with them.

Tree Crops - A Permanent Agriculture, by J. Russell Smith, 1950. Against the trend from forest to field to plow to desert, Smith asks "How can we shift from the grain type of agriculture and ruin to the permanent tree agriculture...?" This forerunner of Permaculture describes the necessity and rationale for food trees.

Hamlet's Mill - An Essay on Myth and the Frame of Time, by Giorgio de Santillana & Hertha von Dechend, 1969. Two vastly knowledgeable university scientists examine a series of archaic myths. The thesis describes the zodiac as the path of a heavenly grinding mill; this rotates around the North Star, and in the process grinds out the basic earthly materials of soil and salt. Heavy reading, but fascinating for the breadth of research and insight.

Re-visioning the Earth- A Guide to Opening the Healing Channels Between Mind and Nature, by Paul Deveraux, 1996 All of Paul Deveraux's books are valuable. They are tied together by an understanding of the ancient mind, how much we have lost in becoming mechanized and technologized, and how mythical thinking and dreaming can reconnect us to the living earth. This book is full of practical techniques for doing just that.

Fairy Paths and Spirit Roads, by Paul Deveraux, 2003 See above re: Deveraux, and Re-visioning the Earth; Here, looking at fairy lore about the land and paths in it.

The Black Goddess and the Unseen Real, by Peter Redgrove, 1987 A poet explores senses that we and other animals have beyond the well known five, and describes how this relates to the "Black" Goddess - black because, here, unseen, and from within self and earth; but also more ancient, powerful and currently needed than the "White" Goddess (see above). Juicy.

The Earth, The Temple and The Gods, by Vincent Scully, 1962 Greek temples were placed in a living landscape, deliberately sited to relate to and harmonize with the landforms around them. Discusses how each temple embodied the goddess(es) or god(s) it was dedicated to. Irrefutable evidence, and notable for how much our ancestors cared about this.

Sacred Land, Sacred Sex, Rapture of the Deep, by Delores La Chapelle, 1988 A deep exploration of our divorce from nature on many levels, and gives many resources from traditional rituals to heal the divide.

Dominion of Dreams / Under the Dark Star, by Fiona McCloud/William Sharp, 1895; Tales of faerie encounters, and the Otherworld.

Harmonies of Heaven and Earth - The Spiritual Dimensions of Music, by Joscelyn Godwin, 1987. Music as catalyst for expanded consciousness - the spiritual power of music. Music's effects on matter. Theories of celestial harmony. Of note, page 52 features an excellent description of features often encountered in the Otherworld, useful for designing trance workings.

Awakening Healing Energy Through the Tao, by Mantak Chia, 1983 Introduction to Chi Gung and the circulation of energy through the body. A foundation block for using Sacred Sexuality.

Fairy Faith in the Celtic Countries, by W.Y. Evans-Wentz, 1911

The Power of Place and Human Environments, An Anthology, Ed. by James A. Swan, 1991

Nature as Teacher and Healer - How to Reawaken Your Connection With Nature, by James A. Swan, PhD, 1992

Kinship With All Life - on Animal Communication, by J. Allen Boone, 1954 Boone convincingly describes his entry into the world of direct communication with animal life, starting with dogs. An excellent companion book (from a quite different point of view) to the more recent and also valuable book, Animals Make Us Human by Temple Grandin.

Ogam - Weaving Word Wisdom, by Erynn Rowan Laurie, 2007. The Ogam are an alphabet; each letter has many meanings in Gaelic language/culture. Ogam is more than just a tree alphabet, and can be used much like the I Ching for of divination using patterns and insights in harmony with the Celtic/European ancestral realm.

Reflections on Men and Ideas, by Giorgio de Santillana, 1968, specifically Part II of Prologue to Parmenides, "Venus Will Now Say a Few Words". Described by Fred Adams as "Of the greatest importance to Feraferia cosmology (mythic of course) Pp 106 - 119 especially 106 - 113!" Astronomy, astrology and time. 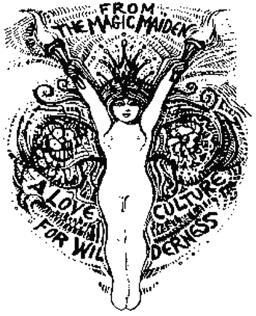