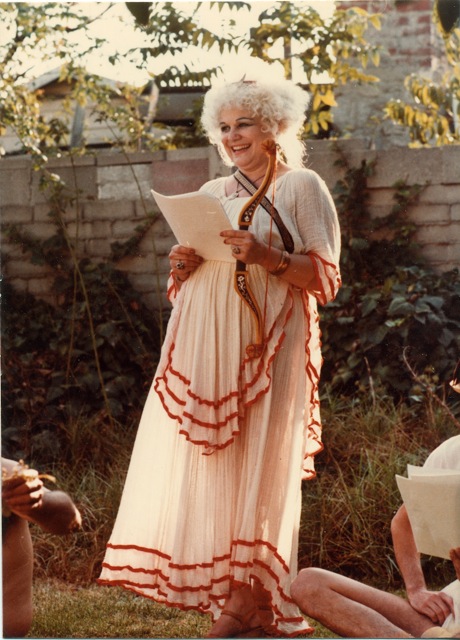 Svetlana Butyrin, or Lady Svetlana of Feraferia, as she liked to be called, passed into the realm of the beloved dead on Thursday May 6, 2010. Born Svetlana Golubeff on November 2, 1934, she was 75 years old. Svetlana had fought off a bout of pneumonia a month earlier, but when it returned, she apparently decided not to fight. She refused to allow the walking and breathing exercises that could aerate her lungs.

Svetlana, along with her life partner Fred Adams, co-founded Feraferia, Inc. as an official church in the state of California on August 2, 1967. Feraferia remained a life-long passion for her. Feraferia means "celebration of wildness" in Latin, and on and off for many years Svetlana and Fred created rituals and parties to celebrate Nature and the divine feminine, especially in the form of "Kore", the sacred daughter or young girl goddess - with all the playfulness and spontaneity that implies. Svetlana wrote a complete set of Feraferian seasonal rituals which were published in Amsterdam, Holland by Feraferia member Peter Tromp (see http://www.phaedrus.dds.nl/fera2.htm).

From its earliest days, Feraferia members spent time in wilderness singing, dancing, and communing with nature and nature spirits. Feraferia flourished in Southern California during the 60's through the early 80's, and then re-emerged in Nevada City, California in the 90's, when Svetlana moved there to be near her children.

Above is a picture (photo by Don Harrison, Church of the Eternal Source) of Svetlana joyfully leading a ritual in 2002. Plagued by occasional panic attacks ever since a frightening dream in her teens, Svetlana was increasingly fearful during her last years. However after Fred died in 2008, she gradually lost her fear of death, partly due to dreams wherein she saw Fred sitting by the gates of a Feraferian Paradise, urging her to come on over. She would answer him "I'm not ready". But finally, she was ready. May the Maiden Goddess bless her on her way.