Early Days of Feraferia and Hesperides

Early Days of Feraferia and Hesperides 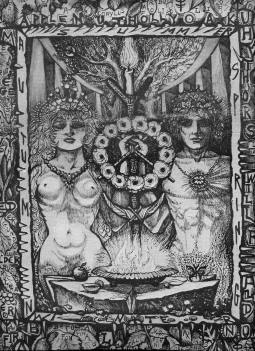 Q: What kinds of things did the Hesperides Fellowship and Feraferia do in the early days?

A: (Fred Adams): We did the "Groundstar" ritual (described in "Dancing With Gaia" in the extra interviews section). That is where we do a faerie trance out in the wilderness and later we invite the same spirits back into our home temple. We exchange little things, take them from the temple to the wild, and bring back small things, like leaves and tiny pebbles. These exchanges build up connections between the two.

We did the Fruit Squash by the river; buying a truckload of overripe summer fruit and squishing it all over each other while we were celebrating the summer climax of the season. That was a lot of fun.

And building a wilderness temple and altar in the San Gabriel mountains, nearby to where we lived, mostly in Sierra Madre Canyon area, and Pasadena, near there, and tending the altar. It was a lot of work, but it was beautiful. We were getting to know the local fay and land spirits in that one area really well.