From Samhain to Repose Time

Multitudes of migrant water birds depart the marshes of Hecate and Hermes, to begin the long procession southward, with the waning Sun of the temperate zone. They stop over in high-grass water-lands on their way. And like the diastolic Sun, the golden Monarch Butterflies swarm southward along Califia’s enchanted coastline. As fallen leaves miraculously returned, these Faerie Hordes fill trees with their volumes of fluttering flame.

The Fays drop everything whenever the mysterious cuneiforms of Geese and Cranes fill the sky. They run, dancing, gesturing and chanting, under the fast-fading visionary script of the hypnagogic season. 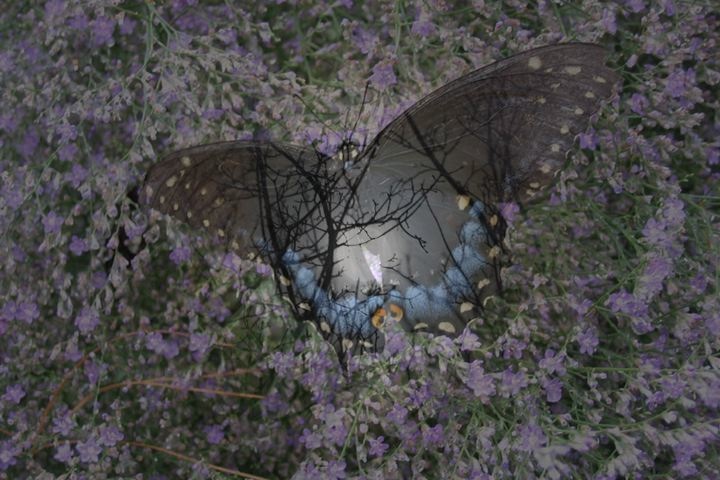 In regular Eco-Psychic Seance, during these nights of magnificent stellar engulfment, the Fays loosen their souls, like deciduous tree leaves, to roam through other continents and climes with the departing winged ones. And they wander out in the Faerie Flesh of Trance to other worlds in deep heaven. These worlds slowly evolve toward each other in some grand stitchery of Paradise, which unites all beings in compassionate galactic embrace.

Primordial Water Fowl darken cooling skies over the rushes. The Fays enchant the wing-beaten Air with complex Crane Dances among the humming reeds. Like ebbing sap, the life of the temperate year returns to the marsh. It is the swamp where life immemorially stages out of ocean, and thence parades along the riparian circuits of paradisal alchemy. Then the eternal stream leads into blazing solar fields and Summer groves, suspending globes of riverine distillations that taste of the Mysteries of secret, sinuous, lunar-liquid returns.

The calls of the departing birds mix mournfully with the cold wind song of Bull Rushes, Cat and Horse Tails. And this peculiar sonic shading of the season awakens, by fastidious operations of Hermetic attunement, the dream-merged Ancestors. But only some souls respond to the coiling stress of the Crane Dance. Those come again who have remained in the misty vales of Persephone, which they themselves extend through the etheric outskirts of Earth’s great body. The crepuscular, sensuously sepulchral sounds of Ngetal, circulating in deep, uvular arroyos of the dark, bounteous Bride Body of Wilderness, settle that Titaness of catabolic luxuriance heavily, heavily into sleep. In the immense density of the Mountain Mind, a single swan slowly slides into the black billows of a Cypress-shielded lake, as dry, brown leaves crack under the hooves of retreating deep. But these sounds arouse those Dead who remain in troth to the Bride of Wildness. They return hungrily to Prophetic Conventions with the living who honor them. For, while awaiting reincarnation on the “Night Side of Nature,” they work in the Faerie Flesh to refine their beloved Nature Systems.

The venerable Children of the Earth-Sky-Love-Lock alternate glossy Earth Rind and pellucid Faerie integuments with Magical dispatch. When the Ethereal Flower of a Faerie, or Astral Incarnation drops into the Ground of Ourania, then a good, hardy Earth-Fruit Incarnation begins with lustrous, huggable solidity. When this Body drops to the Orchard Floor of Stars, its’ unique and eternal Soul Tree, whose roots interweave with all other Soul Trees throughout the whole twinkling and carolling firmament, puts out another flower of Faerie-fleshed Incarnation. Thus each Presence proceeds, as Earth grows, according to the whispering winds, springs and leaves of Autumn vision.

During this phase of the Year, the Fays mulch and plant many trees. They rake up great, glittering mountains of leaves, in which they tangle and play while working. With huge sacks of leaves, they knock each other about. One may lie in wait for another, and suddenly bury them in a rain of leaves. In Faerie, there are no distinctions between love, work and play, nor between subsistence, celebration and service. Because, in the Faerie Faith, to understand is to overflow; to grasp is to release.

More Cthonic fruits are garnered: indecently plump pumpkins and squash are piled about the trunks of particularly Autumnal Trees: fantastic candelabra of leaf fire, frost-lit as beacons to other worlds, above, below, whirling out, spinning in.

On the eve of All Souls, the Faeries crown their Stangs with grinning Jack-O-Lanterns. Once more they twine the shafts with ground-squirming garlands.

Blades of Tule and other water plants are heaped in the corners of the lantern-lit halls and chambers of Korythalia, to freshen their atmosphere, and to attract the wraiths to the Feast of Ancestral Dedication and Merry Monstrosities. The Ancestors must bless the new seeds.

Reeds are plaited to clothe compost heaps and tender plants in need of winter cuddling. Simultaneously, the Elves weave gigantic wicker-work dragons, chimeras, griffins and other fabulous “Calendrical Beasts,” to be set afire in the night, and hysterically pitched against one another.

Most of the ashes of those who have Changed Flesh during the Year have been scattered through their favorite Fire, Air, Earth and Water Ways. But some of these remains have been saved for the conflagrations of Samhain, so the Ancestors may trace and help those who have recently passed into the Night Side of Nature, through the Tinctures of the Crow.

Strange costumes and outlandish masks loom up in the epileptic lurch of orange light and umber gloom. Shrieks of rough-barked laughter streak from mouths wide open in abandon to the forces of dissolution.

The masked fiends roar and howl to each other from across dark distances of rag-tattered mesas and ravines. For miles, scurrying Elves and Gnomes ambush each other with horrible surprises and exact “tokens” for the Dead. For this is the Masque of The Dead, and ghostly Hide and Seek is the game of the hour. The Dead return and swarm cackling over the countryside.

The parts of Soul which have been unfairly rejected or ignored, and yet remain half alive, must be embraced again by those who have rejected them, regardless of repulsion, and creatively re-assimilated for future psychological wholeness.

The suddenly dead who in shock have not transitioned must be remembered and encouraged onwards.

The truly evolved ancestral spirits, in their “interim existence,” hail those in the earth flesh through mediums. Hidden in a brush-lined Thesmophoric Earth-Mind Pit, the seeress sobs to the sounds of bull-roarers, waving rush wands and fluting reeds. Certain ancestors explain the present growth needs of their most beloved eco-systems, of which hey are the tutelary numena in the evolving regional Land Sky Body. They sing the need, desire and will of a cliff in the West, of a mountain in the South East, of a lake in the North and so forth. The Spirits suggest new Sacred Names for the Nature Shrines - names of greater evocative potency. For proper poetic naming of land forms is a sacramental art of the greatest importance. Ridiculous names are anathema to Nature Presences.

Then the Oracle may give Bird Tongue to a particular tree, or a grove. Even a very diversified nature personality, like “Grey Hump Rock-East Bending Sycamore-Moon Arc of Hidden Smile Stream,” may vent Her innermost dream of communal perfection in love.

Finally the Great Goddess of All In All hums and trills a message about the slow but certain growing together of numberless worlds along the branches of the vast Faerie Vine of Celestial Lights.

On the following night, midst din and clatter of uproarious Charivari, the throngs of the “living” and the “dead” assemble before the open Portals of the mysterious Avaline Underground. Here the fruits, nuts, vegetables and preserves are stored for Winter. The moisture and temperature of the Valhallas, or Apple Halls, are naturally regulated by their Megalithic architecture. During the day, the Lord and Pregnant Lady of the Underworld had inspected all the preparations of plants and dwellings for the gathering front of Winter. Now, down the rows of softly singing Fays, swinging lamps and censers of farewell, the Goddess and the God approach the eternal Doors between Worlds. With spondaic step, the Holy Pair pass through the Quartz Gates of Horn, and with Their oracular serpents, disappear among the shining fruits of the storage caverns. The two great doors, the Left Hand Moon Door of Ash, cross-ribbed with Willow, and the Sun Door of Oak ribbed with Holly, swing shut behind the Divine Lovers. The Gold and Silver latches are sealed with the Sigils of Ares and Hermes.

In the fertile gloom of their Underground Chambers, the Lovers enfold all dreams within the circlet of Their embrace. They fall asleep in each others arms