The white, supple branches of the three Birch Trees twist back and forth in a flurry of snow. But after each ice-laden gust, the pendulous arms return unbroken to serene composure. On the northern heights of Califia’s Realm, and even into the Arctic Circle, Birch Tribes revel in the white Winter. Deep, rock-walled gorges reveal the precarious perches of these pioneer river trees. Their roots reach persistently into nooks and crannies of huge, looming boulders. The flexible branches whip about in continual spray from snow-cold cataracts.

The Fays delight in hearth-warmed days throughout the great Halls of Korythalia. Each pursues their art and craft with the gracious flexibility and conscientious patience of the Birches. Some develop new ceremonial mimes, dances and songs for different stanzas in the Sacred Rondolet of the Year. Others devote themselves to deep trance, and perfect the powers of nature-force communion. Inwardly they trace the course of the Great Goddess toward Spring.

Delicious hours pass in wormy wriggling and wrangling through enormous mountains of pillows, under kaleidoscopic domes of stained glass quivering with rain. Many join the seeds in almost continual Winter sleep, strewn about in affectionate heaps through cushion-lined grottoes, where trickles of water and flame mingle their soothing whispers.

Every Kronos Day (usually celebrated every Friday), the Fays race and roll shouting through snow drifts. Some commune quietly with the fragile perfection of virgin snow. Completely naked, the hosts of Faerie fly into the dark, furious rampage of gyrating storms.

In convoluted saunas, celebrants lightly switch each other with thrilling scourges of Birch;then they run silently over gleaming moonstone snow, the Maiden Skin of Nymphet Nimue. 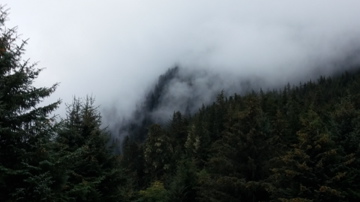 Behind the swerving boles of the sacred Birches, blue waters of mountain freshets and lakes grow grey and then freeze over among mist gathering Sierra towers.

A Venusian triangle of Birches atop a Faerie mound points down a long natal passage to the place of the Vernal Equinox. Within the darkling triangle stands a great stag, his tines terminating in brilliant candle flames. Astride His strong back is seated the Snow Queen. Her head also shines with the Lucia-Crown of nine tapers. The Crown is wreathed with black Elder berries, white Mistletoe berries, Yew berries, scarlet Holly berries,

and sprigs of silver Fir. She raises aloft the Stang, great standard of All Wild. This emblem of Ash now bears only the candle in its crotch. Rotating Her left hand in lunar spirals over the taut polish of Her distended belly, She passes the Stang across the full face of the Moon. The Fir-woven candle bursts into cold flame. With the fiery sceptre, the Queen saines a Birch-bark basket - both cradle and ark - hanging by three white woven cords attached to the three trees. The Sun Ark rocks to and fro, above the Queen’s head with the gentle sway of the Birches. They cradle even the fiercest winds. Umbral Fays change from stars into snowflakes, molding together all features of the Land-Sky-Love-Body with solidifying moonlight of snow.

The stag strides slowly away from the three Birches. He bears the beautiful Lady back into the Dolmen Close. Within these Winter chambers, a great fire crackles merrily upon the hearth stone. Beyond the solicitous fringes of Birch, snows pile upon the dolmen, and cover the distant beaver mounds, snugging them all into a dreamy comfort of seed time.