Out in the drying pastures of the sturdy Oaks, away from the now swarming insects of the stream-beds, grows a bushy evergreen of great nobility. He listens to the merry, dry-twig crackle of cicadas by day, and crickets by night. Similarly, the lissome Rowan had listened to the crack of ice sheets through Luis and Nion Months on the opposite arc of the Mandala of Seasonal Nature Mysteries. The Rowan held her many ears open for sounds that might announce the end of Frost Rule. Now Toyon strains for the heralds that will draw the scorching reign of Sun to a close. Then he may trade his flowers, which in some places he wears even through July, for those reddening berries he shares with his sister, the Rowan, within the charmed circle of Rose and Apple ribes. The Toyon Holly Berries, green for Tinne Month, will turn crimson to celebrate the evening of the year, when the white crescent moon dances, dainty-toed, over the red and golden stairway of the setting sun. 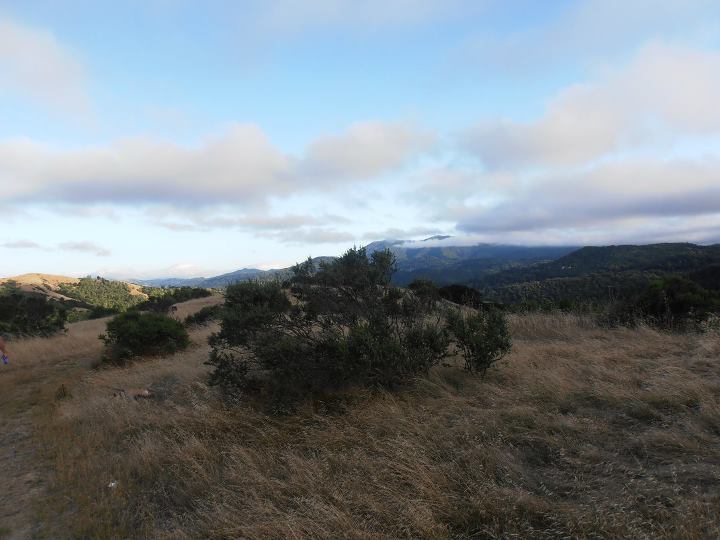 As the heat of the sun increases, the Fays, men and women together now, climb the mountains to catch fantastic glimpses of the meandering Goddess and God. Their course composes incandescent paths of pilgrimage through the sybilline landforms. To follow them is to see this Elm move to the left across the hill; and this great rock move to the right across that stand of Cottonwoods. The messages so versified are glossed at night by communal inlays of dream. They record the Code of the Land from stars dancing across domes of sleep.

During their Holly wanderings, the Fays clear tinder from under trees which are threatened by wildfire. Other areas they close off, and there burn the dead brush, a little at a time, under tight controls. Thus they commune beneficially with the spirits of fire, and encourage the development of adventitious buds and seeds in Chaparral biomes. Dry grasses are hoed up with stangs and pressed into fuel bricks for the following Winter. But for the time being, these are stored under the sacred Toyon Hollies.

The Fays clear and repair the curving, nature-blended sluices that lead from rain-water sumps and from springs, high in the mountains, down into the sacred groves. As always, while they serve, they also perform songs, mimes and dances celebrating the current processes of season, region, and urge. Holly boys of hot fields lead shady ivy girls in meandering dances about Toyon Hollies and Laurel Sumacs. Kokopelli and Kokopillimana, the divine flutists, reveal the magic quail paths.

In spacious apartments formed by the growth guidance of Holly and Sumac bushes, the Fays rest from the work of preparing Winter faggots of Summer grass. In these aromatic caves of chlorophyll, they wile away the mid-noon hours, enjoying the splendous dalliance. It is here that most of the young teach each other the first precious thrills and endearments of love. Whole days may pass in rapture of touching. The Fays caress, rub and pummel each other, and every nature being in their vicinity. Everyone comes to know each biome thoroughly by braille, bringing, in turn, every part of his anatomy into contact with every part of the biome’s anatomy. These virtuosi of touch learn to trace out the voluptuous contours of the greater landforms deified by distance, over each other’s moving bodies. Simultaneously, with deep, inner concentration, they may inhale the fragrance of a particular flora growing on the landform which they exchange with each other through the magic of cultivated caress. This art of Artemis and Aphrodite combined ultimately makes one’s faerie flesh of auto-cthonous touch fill out the whole Land-Sky-Love-Body.

The bush worlds ring with laughter. Bush answers trilling bush across the baking fields, while trees shed leaves to conserve their water supply.

Many devise cunning landmark communion charms, and establish them in poetically strategic places here and there throughout the landscape. The Pictographic Land—Love Language of these charms indicates how to view and feel the thrusts and postures of the region; at what hours and seasons these stress patterns are most prominent due to angles and directions of light and shadow blending; in what kind of weather they are best empathized; and where to go to find the next strophe in the Land Dance Rhapsody. These lines and tracks of love lyric between earth and sky are the Honeymoon Meanderings of the Goddess and the God. The nature signs of region and season show the initiatory sequences of the ‘scape in terms of human erotic urge.

Through the long Summer nights, the Fays somnambulistically travel great distances. They compose new tracks of land-sky revelation. The twists and turns of Gaia’s contours incise themselves deeply in nerve, muscle and viscera, through primeval stick and stone magic, against the aeonic measure of the North Star.

In the moonlight, the Faeries silently water thirsty saplings, and play the hushed game of rock and tree spinning. The Daemons of Tinne, the Holly Month, gambol through the groves carrying bundles of tall stangs. They click them together as they whirl to invisible flutes, making cicada and cricket noises. Nymphs, flitting in the shadowy draws, croak throbbingly in chorus, like frogs. The stangs are placed under boughs bending with the increasing freight of fruit. Or they are used to hoe spiral garden alleys, and to clear irrigation basins about trees, all agleam in the voluptuous moonlight.