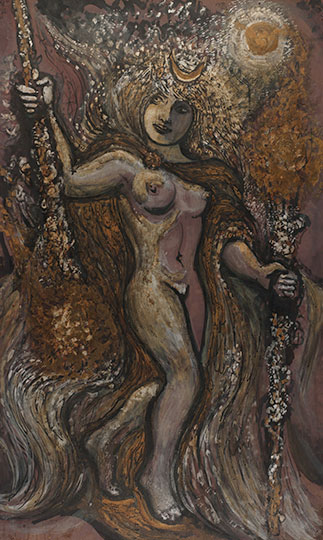 As the picking and grading of cultivated Apples proceeds in the Highlands, the Fays also prepare for the Sacred Riots of Leaf-Fall and Feather-Seed Scattering. These are excellent sacraments of wildness, of land-maze-play, and of nature’s giddiest inebriation. All kinds of dry wildling seeds are gathered into capacious gunny sacks, gaily stitched with the magic pictures of the season.

For the luna-tidal ebb of the year, the maenads, male and female, fashion thyrsos wands in honour of Queen Artemis, or Estasanatlehi, Changing Woman. The thyrsos is embellished with red Toyon berries, or wild grapes, and ribbons in the regional color code of the season .On their right arms, above the elbow, the maenads imprint with vegetable dye the sign of swift-hooved doe or buck. Into lush patches of shade and moisture-loving ground covers, such as wild cucumber and Ivy, the bacchae swarm to romp and tickle each other into confluence with earth, as the last bees of the year visit late blossoms. Or they simply lie about and watch leaves of surrounding Poplars and Maples turn gold under a rising moon, saturating themselves with the spiritual essence of fall; a necessary phase in their life-long psychic Individuation via nature signs of season, region and urge. Crawling and climbing Ivy wines, in the shade of bigger trees, are the evergreen exponents of Earth. Toward Earth’s deep, generous bosom the forces of plant life, leaf, seed and sap, now drop in the eventide of the year.

Early in Ivy Month, the young Goddess and God of the innocent chase assemble leafy Bacchae under autumn thrones in the newly opened halls of the faerie mounds. They rub each others' bodies with blooming brushes of Coastal and Trident Sage, sacred in their aromatic evocative potency to Artemis, the Great Lady of Wild Things. Some rub in an oil infusion of the Mystic Sage.

With thyrsus wands and bell-jingling bags of wild flower seeds, the laughing hoardes begin their Races of the Wind late in the afternoons of these exhilarating days. With stangs transformed into rakes others prepare barren hillsides for the seeds that will sprout Califia’s carpets of color the following Spring. Also, the seeds must be raked into the soil a little after scattering, so the new rains will not wash them away.

The gleeful Maenads race for miles over the pollen paths that lead from one sacred grove or garden to another in the wilderness. During these races of the Yonic Season, females pursue males, waylay, surround and ground them in wild, amorous confusion.

The ferocious surge of the tendril-tangling Ivy spirit sweeps many seed scatterers even up into the late flowering meadows of Arctic Alpine Peaks. In the throes of taking rhapsodic “intelligence with the Earth,” the Maenads race beyond fatigue. The heaving waves of muscles flash with nectar of purified sweat in the twilight. The spirits of the celebrants expand to skies that widen now through opening cupolas of leaf.

Down from glowing peaks, the Maenads return, in tired little bands, to the Great Halls of Korythalia. Though scratched, bruised and aching, their breasts are easy with content. For into the winds that carry the seeds they have broadcast, they have also committed their soul-breath. And so, sparkling in their loins, they bear the warrant of life to gallop the star ways tonight, from world to world.