Here is a concept that Fred Adams put forth in his writings that you may find interesting: 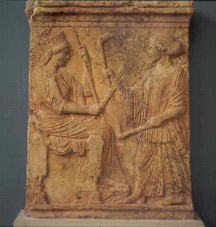 The Eleusinian Mysteries of ancient Greece (see below), which Fred always cited as the wellsprings of Feraferia, are centered around the myth of Demeter and Persephone, the Great Mother and her Daughter (also called Kore). It tells the story of Persephone being abducted by Pluto into his underworld domain. There, She became his bride and the Queen of the Dead. Demeter, in her grief and loss, no longer supported the growing green world, so all the crops failed.

The Olympian Gods became upset about no longer receiving sacrifices from the now starving populace, so they arranged a deal with Pluto to allow Persephone to return to Her Mother. However, since Pluto had convinced Persephone to eat 3 (the exact number is debated) pomegranate seeds while there, she was required to return to the underworld for that number of months each year. Thus, the seasons were established, since when Persephone goes below, the growth stops, and when She returns, the green world starts its cycle of growth once more. Of note, the pomegranate seed is nature's richest source of plant estrogen, which is certainly related to fertility in the human and animal world.

Demeter, in her gratitude over the return of her Daughter, went on to teach the mysteries of agriculture to Triptolemos, who spread that knowledge out to the world.

What is interesting in Fred's interpretation is that, while Demeter was able to secure rebirth for Kore Persephone, Persephone herself, because of her loving nature, forever changed the nature of the underworld, to allow all other humans to be reborn as well.

Thus reincarnation of us mortals was established. Blessed Be!

Demeter initiates Triptolemos into mysteries of grain growing, while Kore Persephone applies a bronze crown to his head (since removed). 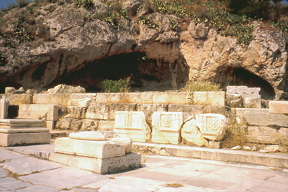 The Plutonium, entrance to the underworld at Eleusis. Eleusis is about 14 miles west of Athens in Greece. 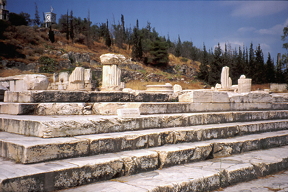 Telesterion, the place of "seeing" at Eleusis.

Model of Telesterion and surrounding buildings at ancient Eleusis.