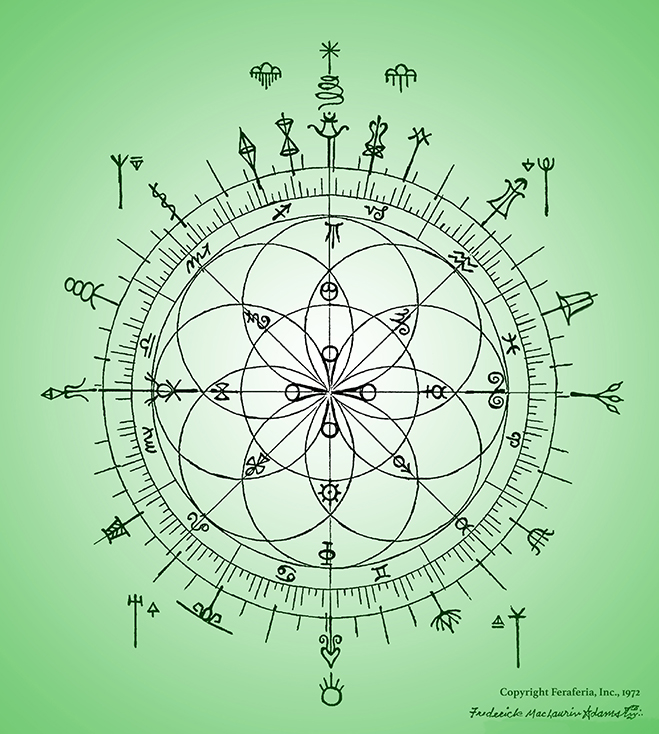 The word Enneasphere means "nine-fold-sphere." It is basically a Wheel of the Year, with many aspects of the cosmos placed in their rightful order on it.

As designed by Fred Adams, there are eight outer spheres within the bounding circle, and one in the center. The outer ones represent the five visible planets plus Sun, Moon, and Earth. The central sphere represents the central Source, Galaxy, and Universe, all at once.

The Enneasphere is like the Cabalistic Tree of Life in representing aspects of our spiritual world; and yet, there are important differences. It presents a circle as the basic relationship between spheres of being, which is quite different from the above/below motif of the Tree of Life. The Enneasphere specifically does not place Earth at the bottom of a great Chain of Being. That view has led to millennia of disrespect for our precious home planet and her Spirit, and for our physical bodies with their natural urges and desires.

The Enneasphere was created in the late 60s to early 70s by Fred Adams. However, Fred had been inspired in that direction by seeing a Rose Cross image in Paul Christian's History and Practice of Magic, and according to Carroll "Poke" Runyon of the Church of the Hermetic Sciences, Christian may have gotten his idea from Idries Shah's The Secret Lore of Magic, which depicted a circular talisman in an 18th century French manuscript of The Key of Solomon.

You can read the Enneasphere like a map, with North being up, and East on the right.

Each Planet has its symbol in one of the outer spheres. Mercury is on the right, in the position of East, dawn, Spring Equinox, the Air Element, the suit of Wands and the beginning of Springtime. SouthEast holds energetic Mars, and the May-day the Feast of Beltane.

In the South is the Sun, Mid-day, Summer Equinox, the Element of Fire, the suit of Swords, and the official beginning of Summer. Southwest holds the Planet Venus and the Feast of Lammas.

In the West is the Earth, with the symbol of the Minoan double Axe for Psyche/the Soul of the Earth, Evening, and the Fall Equinox. In Feraferia, West is the direction of Earth (at our feet, symbolically opposite Air above our heads in the East) and Pentacles, when the Fall Season begins. In the NorthWest is the Planet Saturn and the Feast of Samhain.

Due North holds the Moon, Midnight, Winter Solstice, Cups, and the Water element. Water in the North and Fire in the South thus form the primal Yin-Yang pairing of opposites. Finally, NorthEast holds Jupiter and the Feast of Oimelc ~ Bridgit. 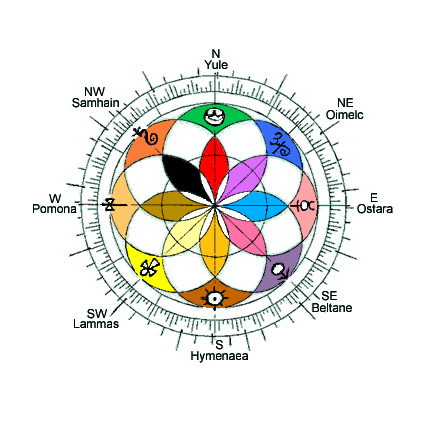 The colored version of the Enneasphere just above was put together by Feraferia member Peter Tromp in the Netherlands. Thank you Peter!

Fred created many versions of the Enneasphere, to show the complex relationships between each of the planets, between the planets and the Major and Minor Arcana of the Tarot, and especially, to identify the placements and meanings of his Ogham-based Axerian Hieroglyphs relative to the Sacred Year (seen on the green Enneasphere in the top picture). Above is but one version of the Enneasphere, with the Feraferian names of each Festival next to the appropriate time of year. The little marks on the outside of the Enneasphere represent the weeks. 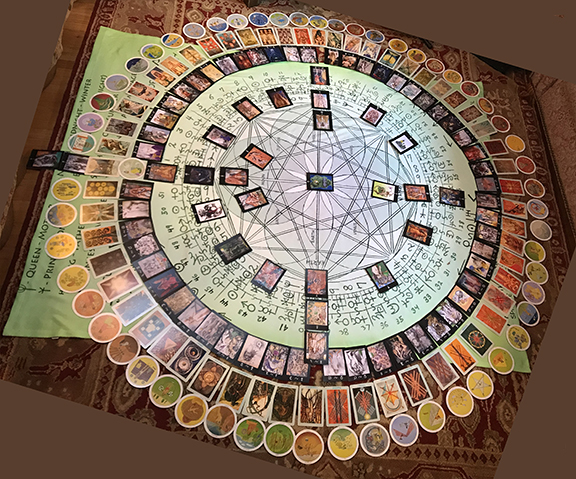 Above, three Tarot decks are placed in their appropriate spots on the Enneasphere Wheel; one card for each of the 52 weeks of the year, less four court cards representing four members of the Divine Family, who are separated to preside over the Four Seasons; thus using all 56 of the Minor Arcana. Outermost is the MotherPeace deck, then Crowley Thoth deck, then on the inner circle is Jo Carson's in-progress Feraferia Tarot Deck.

This Enneasphere shows the relationships between each Planetary Sphere. For example, the Sun, at the bottom in the South, has seven rays extending out from it, just below where it says "Fire." Reading in a left to right fashion, it connects first with Venus, then Psyche of Earth, then Saturn, then the Moon, and on around the Enneasphere. The line from the Sun to Venus reads as "The Sun As Influenced by Venus." Venus will have her own set of lines, since each line goes both ways and carries two meanings. When reading from Venus's point of view, that same line will be "Venus As Influenced by the Sun." These 56 lines of meaning form an important basis of interpretation for the Minor Arcana in the Feraferia Tarot. Updates coming soon!